A grid is like underwear, you wear it but it's not to be exposed. Massimo Vignelli

Ever stopped to wonder how grids have shaped the world - from fishing nets and maps, to spreadsheets and social networks?

grid noun (PATTERN/STRUCTURE): a pattern or structure made from horizontal and vertical lines crossing each other to form squares
​This resource is presented in 5 parts: Part 1: 'Ancient Time-Lines' considers some of the earliest uses of grids for creative means; Part 2: 'The Measure Of Things' introduces the grid method as a Renaissance-devised (and seemingly 'traditional') drawing device; Part 3: 'A Modern Matrix' shares how grids became a framework for Modernist art and design; Part 4: 'The Grid, Bridged' looks at how some artists, inspired by Modernist approaches, have knowingly embraced the grid; and Part 5: Disrupting the Grid unpicks how some contemporary artists continue to extend on - and dismantle - grid ordered influences.

Each section contains a selection of images (in grids, obviously), followed with prompts for discussion, links for independent research, plus practical activities for the classroom. Click on the images to view larger. 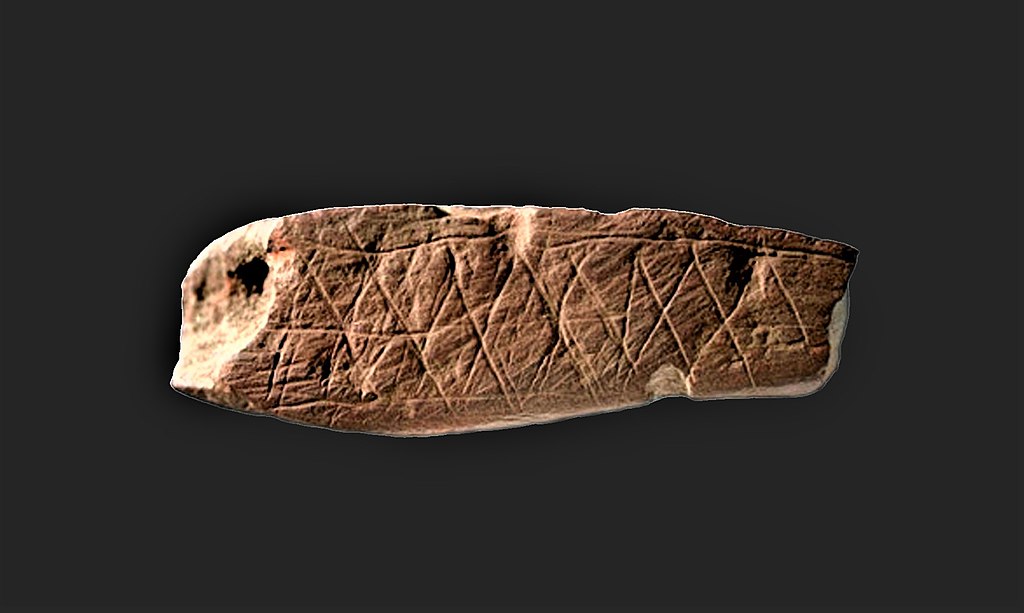 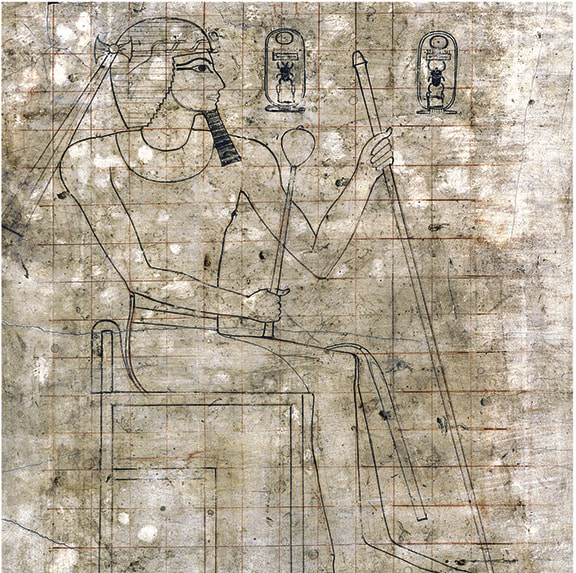 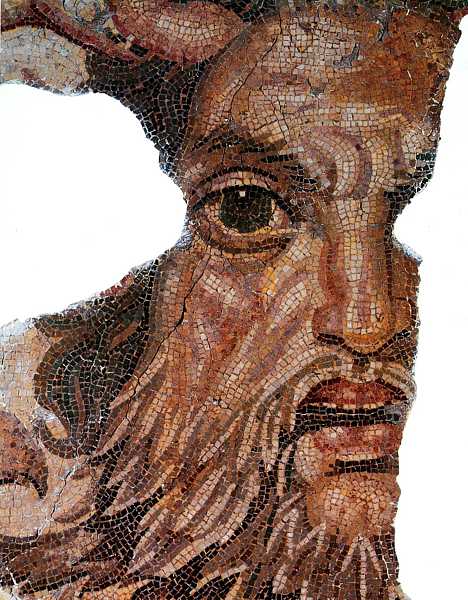 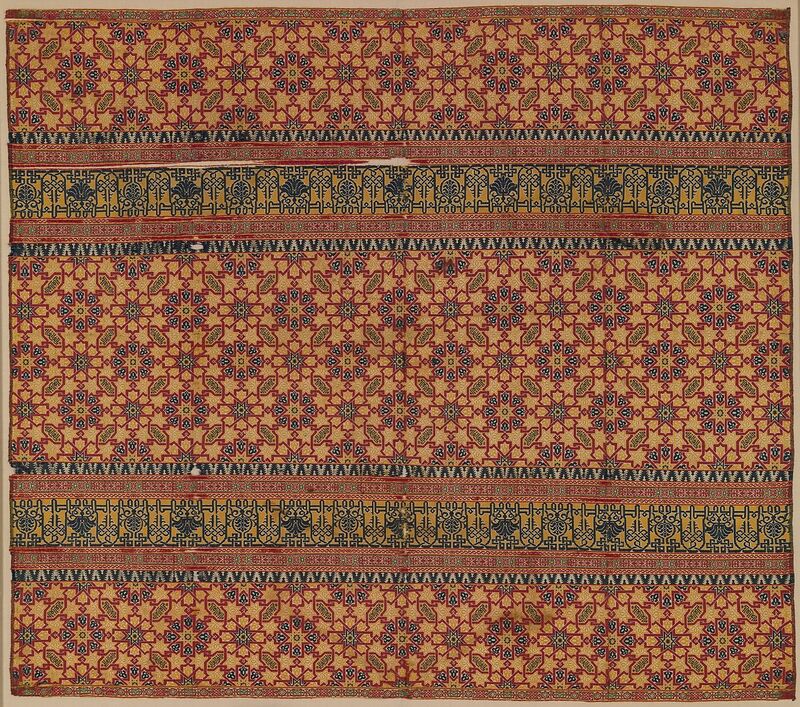 PRACTICAL IDEAS FOR THE CLASSROOM

Part 2: THE MEASURE OF THINGS 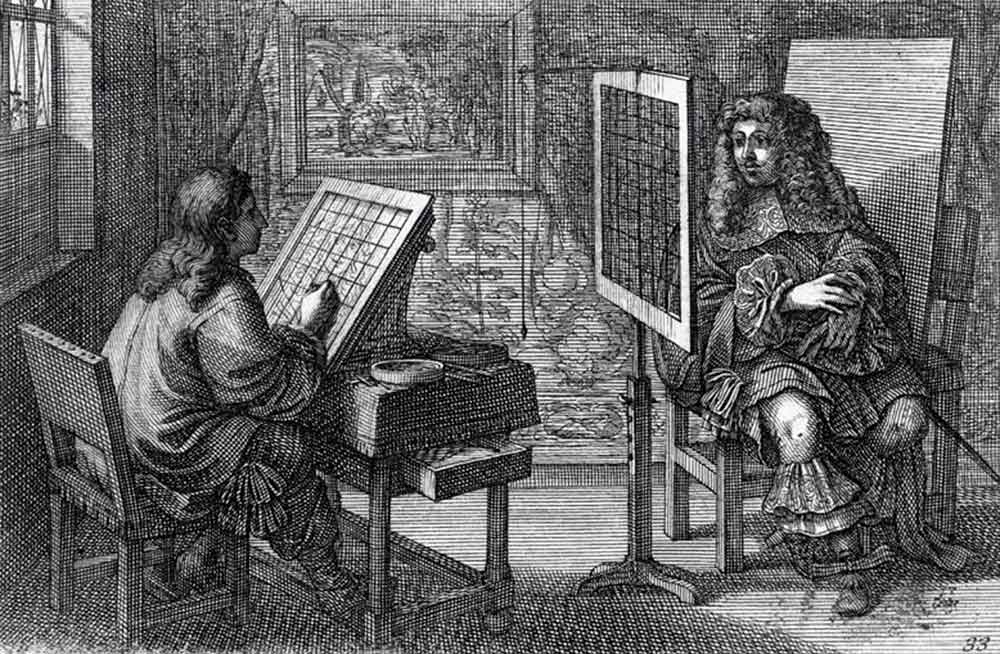 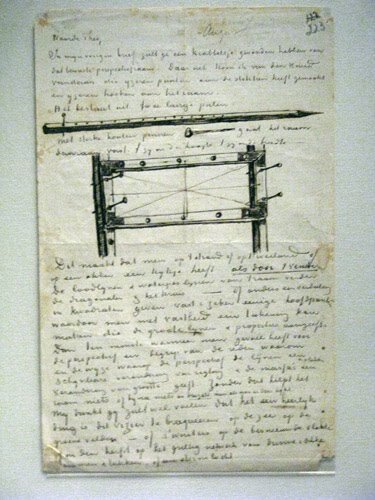 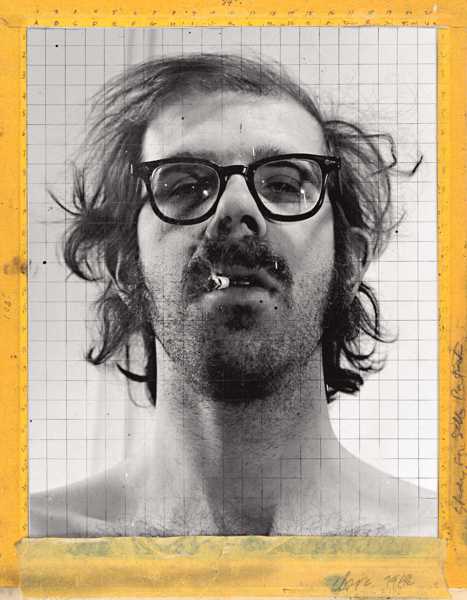 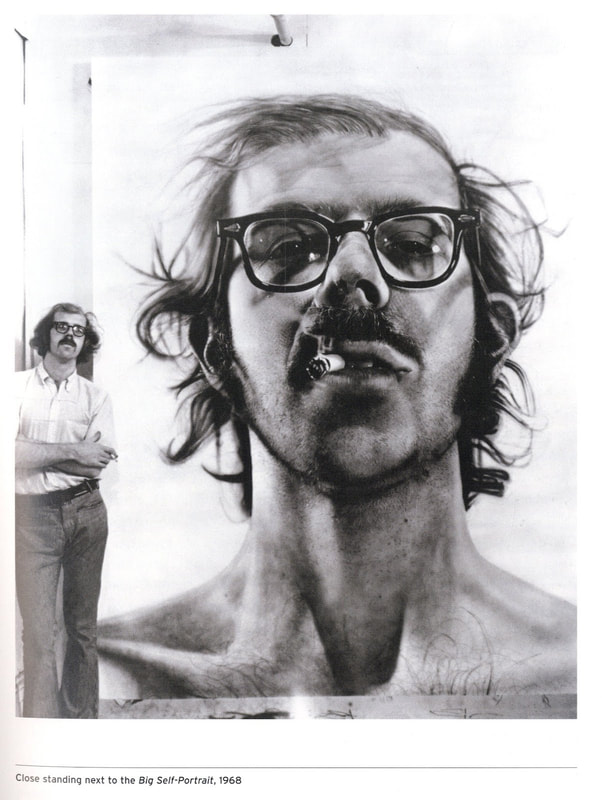 One of the distinguishing features of Renaissance art in the 15th Century is the development of linear perspective - a mathematical system used to create the illusion of space and distance on a flat surface. To use linear perspective an artist has to imagine the canvas as an "open window" through which he sees the subject of the painting. This fascination with mathematical proportions, construction of space and accurate representation led to new advances in 'realistic' drawing techniques.

In 1506 the German artist Albrecht Dürer wrote “Treatise of Measurement”. This included illustrations of perspective devices such as 'the draftsman’s net' which consisted of a square wooden frame with a net of black threads forming a grid structure. The artist looks through the frame and copies the outlines of what he sees onto a piece of paper with a replica grid marked on it. This technique has been adapted and deployed by artists in numerous ways to aid observing, composing and drawing.

There's something Zen-like about the way I work - it's like raking gravel in a Zen Buddhist garden. Chuck Close

IN MY ART, I DECONSTRUCT AND THEN I RECONSTRUCT, SO VISUAL PERCEPTION IS ONE OF MY PRIMARY INTERESTS. CHUCK CLOSE 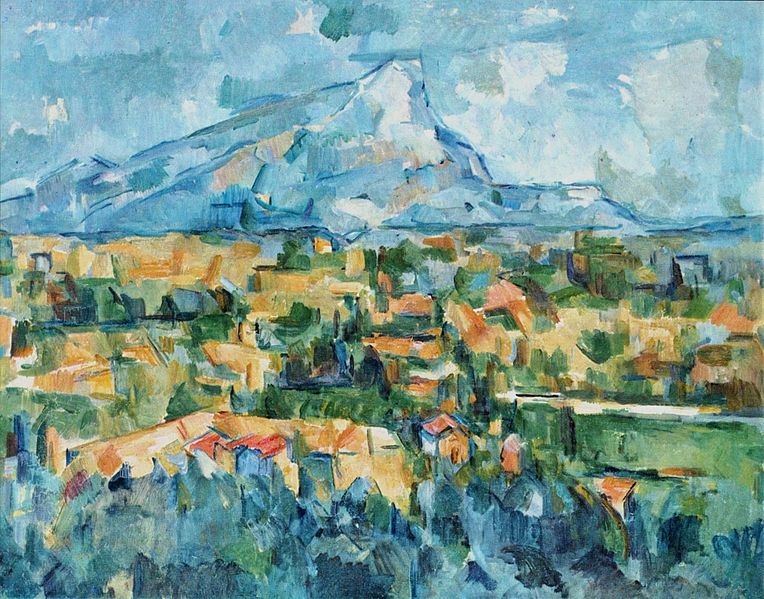 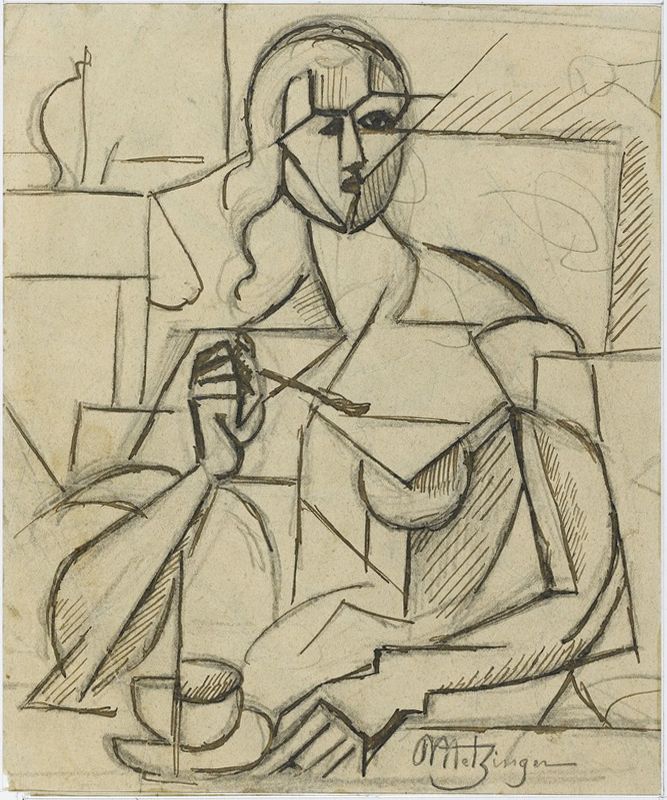 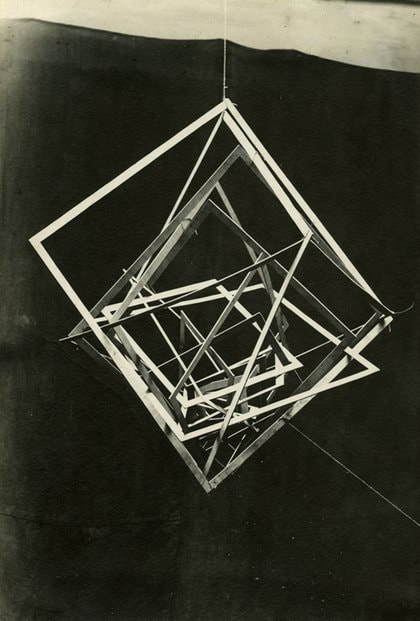 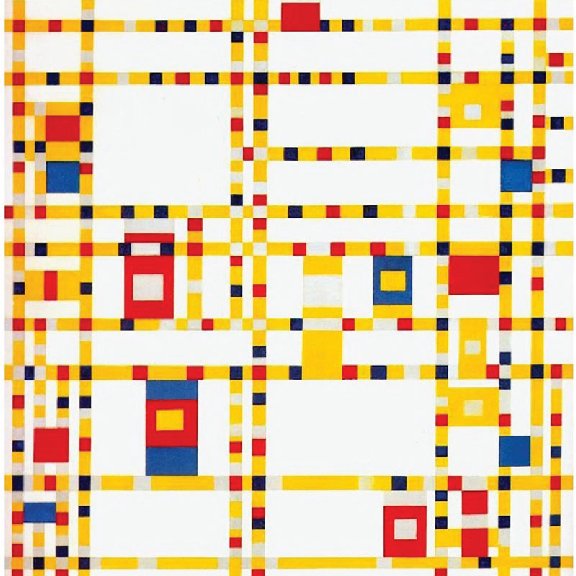 Piet Mondrian Broadway Boogie Woogie, 1942-43
Images from top left to right:
1. Paul Cézanne, Mont Sainte Victoire, 1905. Cézanne's work at the end of the 19th Century laid foundations for new, radical and 'Modernist' ways of responding to the world. His interests in binocular vision - how we encounter and combine the world with two eyes - and his subsequent experiments with spheres, cones, cubes and 'planes' of vision led to works containing shapes and edges that often appear grid-like in appearance.
2. Jean Metzinger, Tea Time, 1911. Jean Metzinger produced this preparatory drawing for a painting that was deemed revolutionary in it's time for its exploration of pictorial space. This method of experimental recording - developed moving around the subject recording multiple viewpoints - became known as Cubism.
3. Aleksandr Rodchenko, Hanging Spatial Construction no.11 (Square in Square) c.1921. Rodchenko's experiments with grids incorporated painting, photography, sculpture and design. Whilst many Western European artists embraced the grid as a means for abstract 'Modern art', Rodchenko was drawn to its formal and functional qualities - its practical uses as a means of communication, design and bringing order to society.
​4. Piet Mondrian, Broadway Boogie Woogie, 1942-43. Mondrian's interest in pure abstraction eventually led to him limiting his artistic vocabulary to primary colours and black, plus horizontal and vertical lines. As a consequence, his work employs grids of various compositions. 'Broadway Boogie Woogie' makes reference to the grid-like road structures of New York, alongside the sounds and sensations of Jazz music of that era.

'Modernism', simply put, refers to the period of time from the very beginning of the 20th Century up until the late 1950s. It might be summarised as a period when creatives embraced new ways of looking, thinking and making (notably, but not solely, in abstract ways) and did this with relative amounts of optimism. In contrast, 'Post-Modernism', might be broadly summarised as following Modernism (obviously) and, post-1950s - marks a dent in the optimism, introducing increasing layers of complexity - not least: increased self-awareness and retrospective pondering, doubt, irony, humour ... 'knowingness' too - that might be a helpful word here.

'Knowingness' because - although it is not always easy (or necessary) to organise artworks and ideas of individuals into tidy categories (or grids, even) - these next 4 images or artists (at least to me) seem to bridge modernist principles to hint at - rely on, even - an existing awareness of the grid as an established device deployed for creative and/or scientific means.  Which might sound a bit complicated but could be described as 'post-modern' thinking. Possibly... 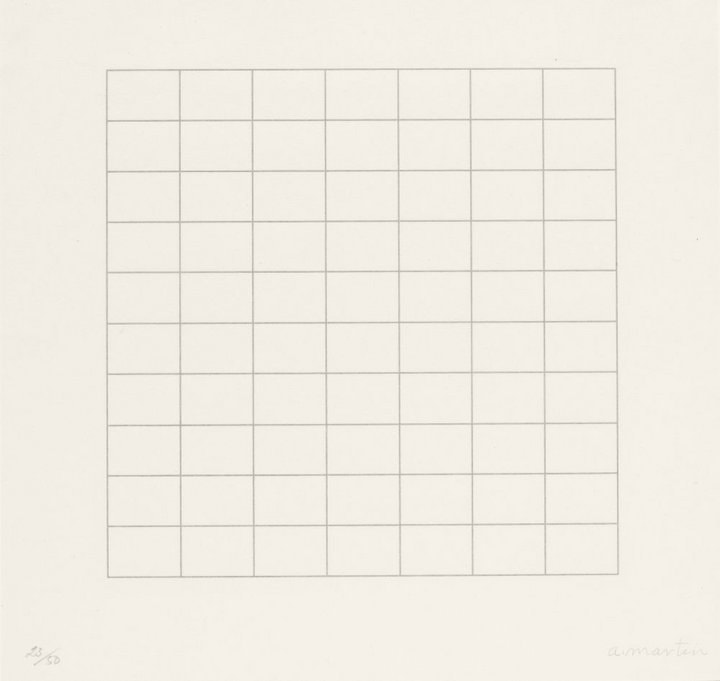 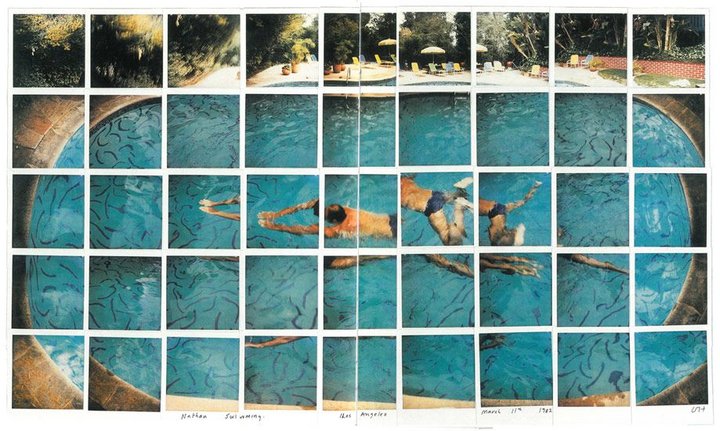 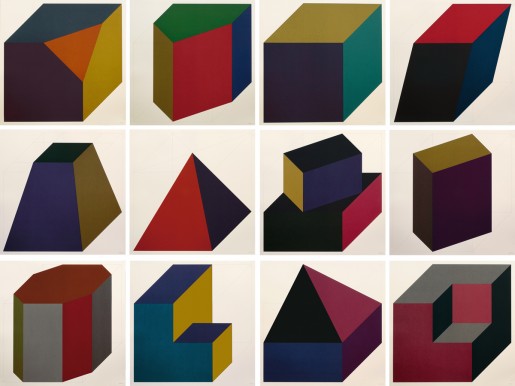 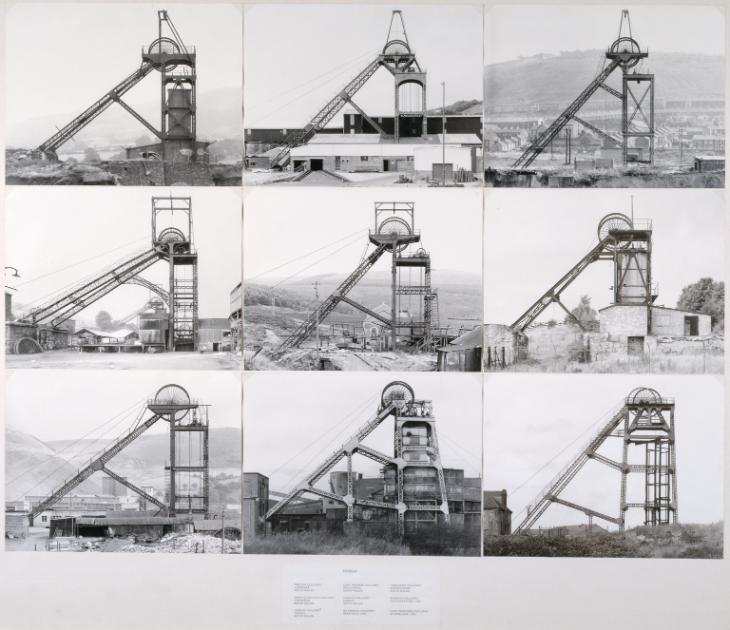 Bernd Becher and Hilla Becher, Pitheads, 1974
1. Agnes Martin, 'On A Clear Day', 1973. Martin's work might best be considered on meditative or philosophical terms - heightened sensitivities made tangible. Her fascination with hand-painted and meticulously drawn grids stem from an interest in trees and nature - not in a literal or recognisable sense, but rather as an extension of a personal quest for unity, simplicity, happiness and peace of mind on her own terms.
2. David Hockney, Nathan Swimming, 1982. Hockney was - still is - fascinated with ways of looking. He has researched and made important discoveries relating to grid use throughout art histories. Cubism has also formed a key influence in his work. His polaroid montages and 'joiners' embrace a grid format which emphasises the fragmented and movement-centric way that we see the world.
3. Sol LeWitt, Forms Derived From A Cube, 1991. LeWitt had a profound interest in series and systems, influenced by Eadweard Muybridge's photography. This work takes a seemingly typological approach in its analytical and methodical study of forms.
4. Bernd Becher and Hilla Becher, Pitheads, 1974. The Becher's photographic collaborations involved grouping photographs within grid formations. The work draws attention to the sculptural properties of everyday structures and prompts reflection on similarities of form and function, place and purpose. 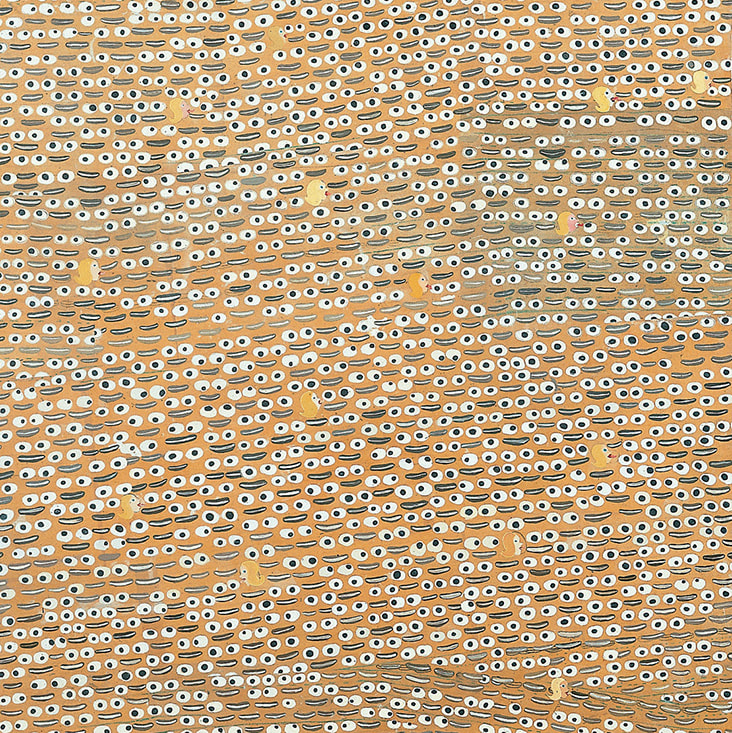 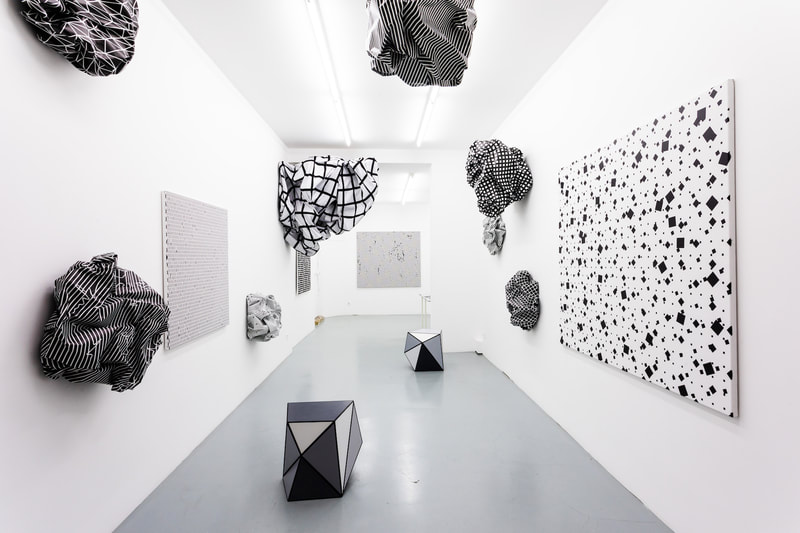 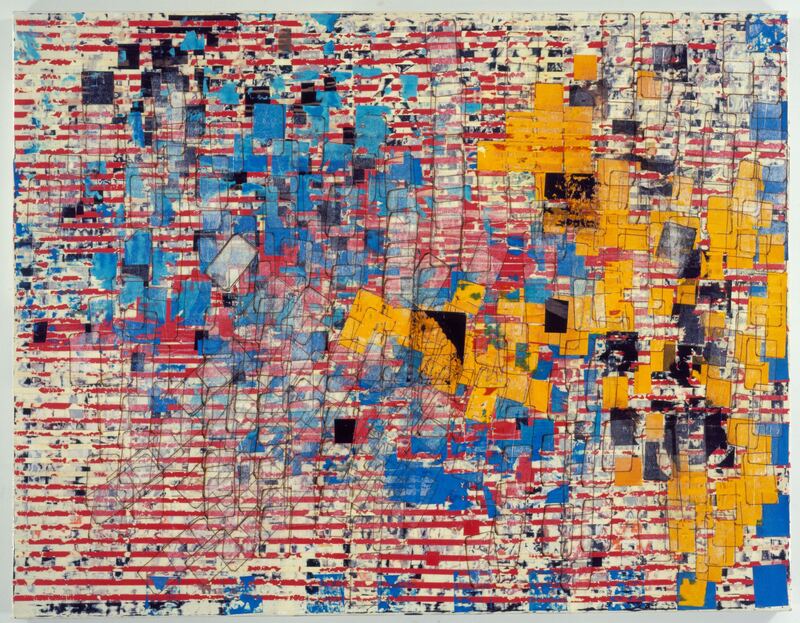 Mark Bradford, Disappear Like A Dope Fiend, 2006
1. Ellen Gallagher, Oh! Susannah, 1995. In this work, Ellen Gallagher creates a dense surface of repeated symbols - googly eyes and wide grins interspersed with a series of blonde heads in profile with their tongues sticking out. The title relates to Stephen Foster’s minstrel song Oh! Susanna. The song was originally ‘a slave lament – about families being ripped apart’. The eyes and mouths are ‘the disembodied ephemera of minstrelsy’ – the caricatured make-up adopted by singers, comedians and dancers to present black characters on the stage. For Gallagher, minstrelsy was ‘the first great American abstraction.
2. Esther Stocker, Loving Imperfectly, 2020. Esther Stocker experiments with disrupting grid forms in 2 and 3-dimensions and, as a consequence, also plays with our perception of space.
3. ​Georges Rousse, Seléstat, 1999. Georges Rousse creates illusionary work, painting and then photographing in architectural (often abandoned) spaces. His paintings, when viewed from a specific point and recorded via a camera lens, appear as if they are flat grids and shapes upon the surface of the image.
​4. ​Mark Bradford, Disappear Like A Dope Fiend, 2006. Mark Bradford's work, suggestive of grids, maps and networks, draws on his personal experiences and encounters with the urban environment. His large scale works are often made from torn billboard posters and detritus collected from the streets. These collected scraps hold their own stories, histories, politics and agendas and Bradford works through a process of decollage and collage - tearing away and layering up - to bring these into a collective work.

practical ideas for the classroom

NOTE: This, above, is a deliberately open-ended final challenge. The intention is to promote thinking about some of the complex themes that are touched upon in this resource - themes of representation and accuracy; order and disruption; artistic intentions and tensions - and new possibilities too. And then hand these over to you, to make your own authentic responses. This approach is always best at GCSE - much better than simply trying to tick an assessment grid!

If you are a teacher or artist working in another school and use this resource for inspiration, please do consider sharing your results. You can do this on Instagram by tagging @artpedagogy.

​If you would like to make a donation to support our creative projects and the ongoing sharing of resources you can do so via the 'Donate' button here. All feedback and thoughts very welcome.