​So, what type of marks do artists make?
Threshold Concept 1 reminds us that artists can make many different types of marks, and for many different reasons. We might describe types of marks through their: Why do artists make marks?
The reasons why artists might be moved to creative action are numerous, often highly personal (but not always), and subject to change with experience and time. Artists might produce art in response to experiences and emotions; as a means of engaging with the world; as a form of learning, communicating, questioning or challenging ideas and conventions. Artists also produce work for others, for income and profit, for decoration and design...

Consider the following combinations of images below and how they have been ordered under the headings 'Traditional', 'Modern' and 'Contemporary'. ​ 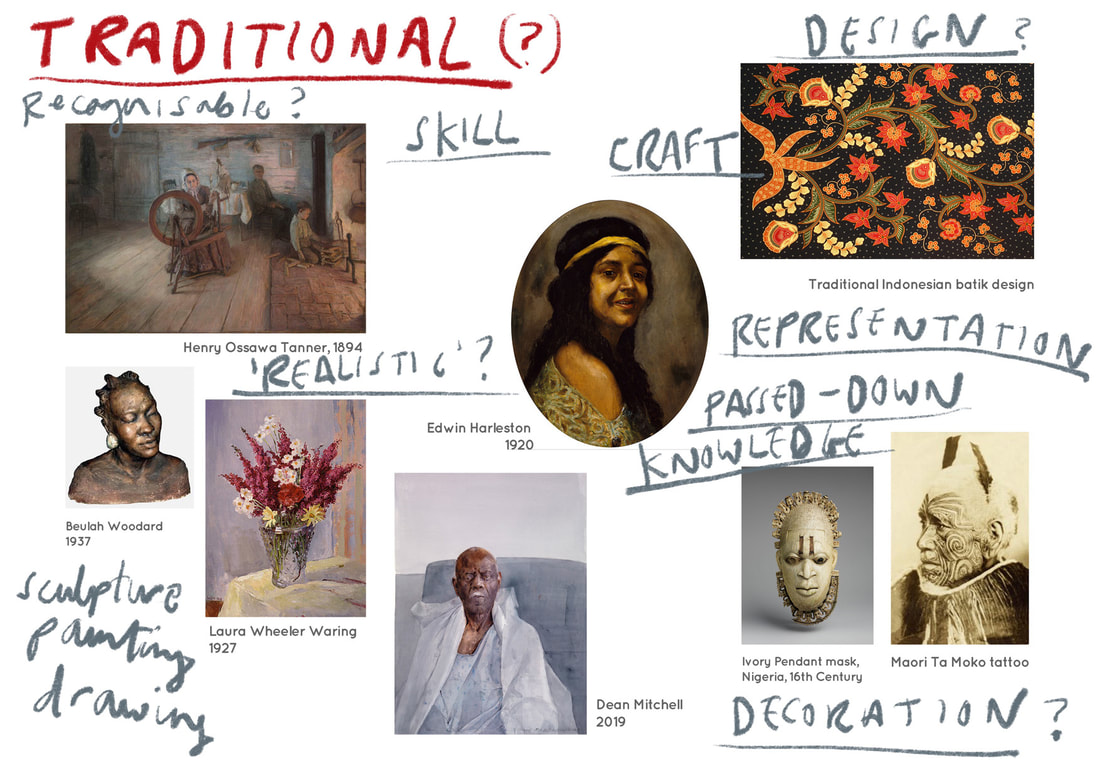 About' Traditional'. 'Traditional' art might be considered artwork where specific skills, techniques and/or styles are established within a culture and have been taught and passed on. For example, 'representational', 'figurative' or 'realistic' works such as drawings, paintings or sculptures might often be described as 'traditional'. But it's worth keeping in mind that contemporary artists also play with our expectations of these, and traditions are subject to change. 'Traditional' art might also be taken as craft-based, designed or decorative.  Some artworks considered traditional might also be described as abstracted (generally considered a 'Modern' term) or be comparable to contemporary forms, such as installations or performances. 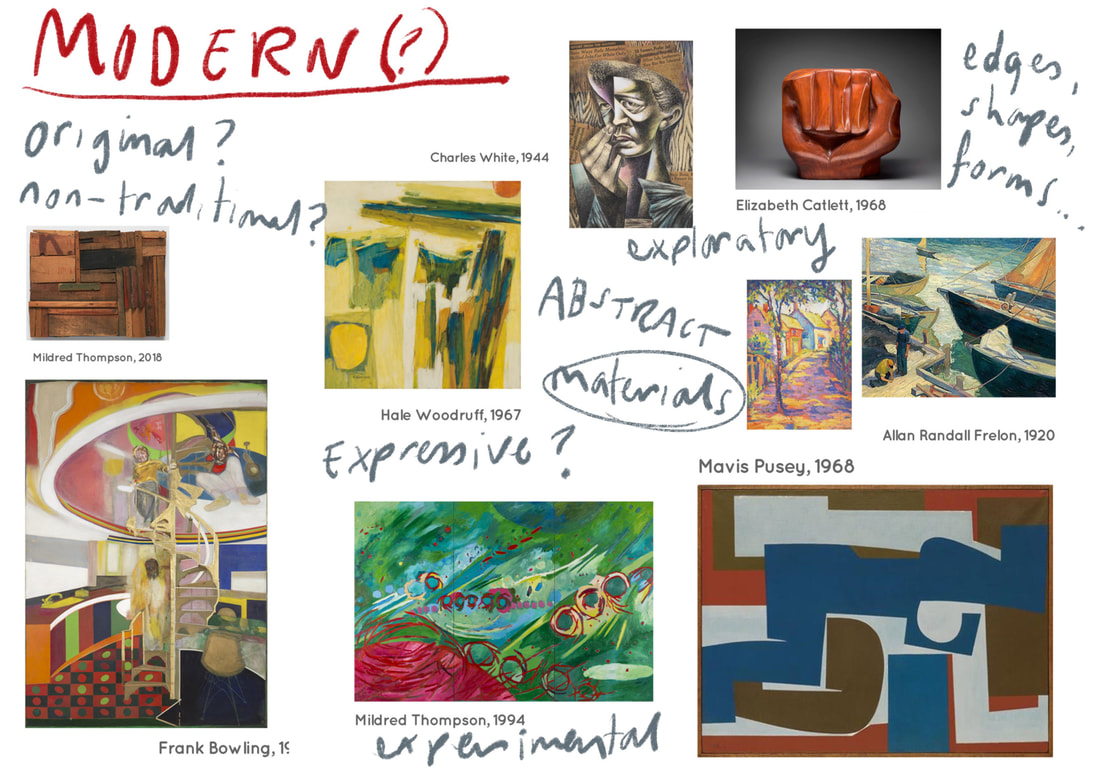 About 'Modern'.'Modern' art might be considered as a challenge to 'traditional' approaches. In art history terms, the 'Modernist' period tends to refer to the period of time from late 19th Century to mid 20th Century. This was a period of great change, a time where many artists challenged traditional techniques and ways of perceiving and recording. Movements such as Impressionism, Post-impressionism, Cubism, Futurism, Expressionism and Abstract Expressionism (along with many others) might be described as 'Modern'. But many artists today continue to explore ways of looking and recording (as did some artists prior to 19th Century). It might be argued that some of these now-established Modernist approaches have or will, with time, become considered 'traditional'. 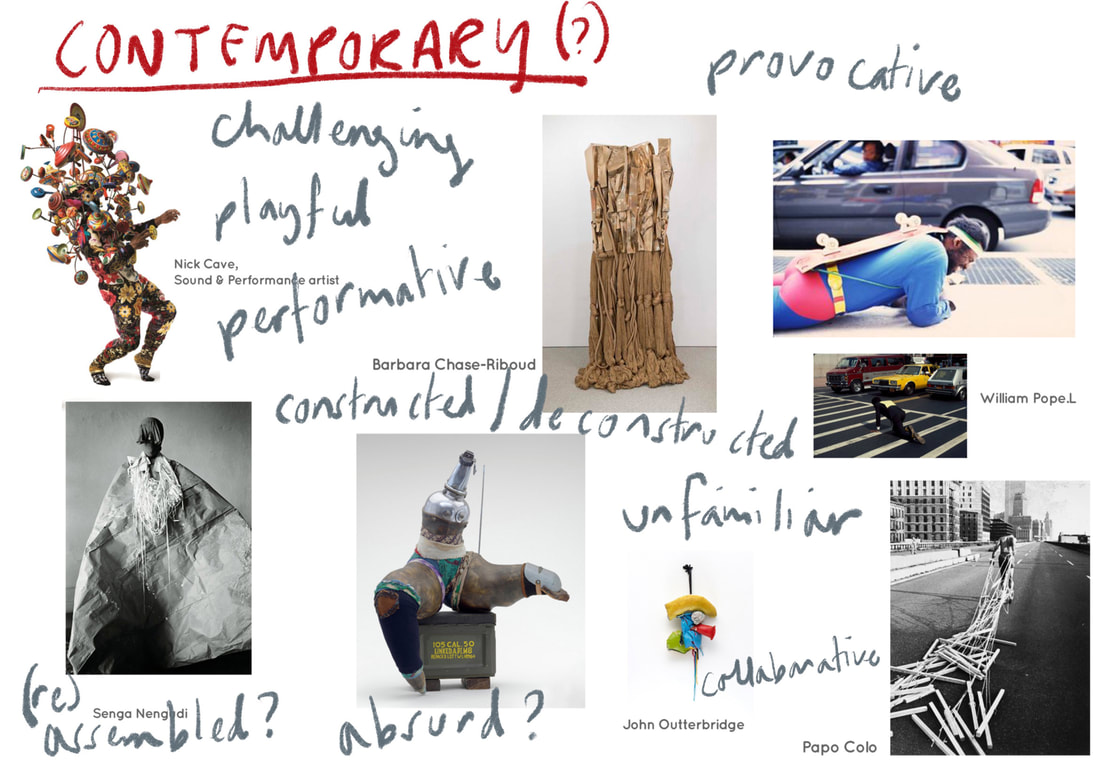 'Contemporary' art is a complex soup. The 1950s saw a wider emergence of  ways of making art that might be considered more self-aware or self-referencing, ironic, playful, troublesome, less-obviously skilled even. Pop Art (for example), provides many examples of this. There was also an increase in the appropriation of existing objects as art - albeit a practice established much earlier by artists, most famously Marcel Duchamp. Art also moved increasingly out of traditional gallery and studio spaces. 'Happenings', events, collaborations and 'performances' emerged to challenge - play with, even - the notions of 'traditional' and 'modern'. In timeline terms, this shift might be described as 'Post-Modern', but of course many of these ideas and actions had been explored previously within different contexts. (Art movements such as Dada and Surrealism, for example, had embraced performance, absurdity and assemblage; ancient tribes, such as The Dogon of Mali created fantastic costumes for collaborative performances, ceremonies and rituals).